Haven't they heard of global warming? LOL: it'll be all the folk heading to Aussie for a better life...
Posted by Clunking Fist at 4:50 PM No comments:

Ha ha, "So, Prime Minister, there is no target for this policy" of helping people buy houses. Unfortunately, I not sure some listeners would realise why it's important, for fiscal responsibility reasons, to have targets when doling out taxpayer money...
Posted by Clunking Fist at 7:20 AM 7 comments:

Police launch dawn raid on boy of 12 'over school fight'


I received a great email joke the other day:

Scenario: Johnny and Mark get into a fistfight after school.
1960 - Crowd gathers. Mark wins. Johnny and Mark shake hands and end up mates.
2007 - Police are called, SWAT team arrives and arrests Johnny and Mark. Mobiles with video of fight confiscated as evidence. They are charged with assault, AVOs are taken out and both are suspended even though Johnny started it. Diversionary conferences and parent meetings conducted. Video shown on 6 internet sites.

Scenario: Jeffrey won't sit still in class, disrupts other students.
1960 - Jeffrey is sent to the principal's office and given a good paddling. Returns to class, sits still and does not disrupt class again.
2007 - Jeffrey is given huge doses of Ritalin. Counselled to death. Becomes a zombie. Tested for ADD. School gets extra funding because Jeffrey has a disability. Drops out of school.

Scenario: Billy breaks a window in his neighbor's car and his Dad gives him a whipping with his belt.
1960 - Billy is more careful next time, grows up normal, goes to college, and becomes a successful businessman.
2007 - Billy's dad is arrested for child abuse. Billy is removed to foster care and joins a gang. Psychologist tells Billy's sister that she remembers being abused herself and their dad goes to prison. Billy's mum has an affair with the psychologist. Psychologist gets a promotion.

Scenario: Mark, a college student, brings cigarettes to school .
1960 - Mark shares a smoke with the school principal out on the smoking area.
2007 - Police are called and Mark is expelled from School for drug possession. His car is searched for drugs and weapons.

Scenario: Vinh fails high school English.
1960 - Vinh goes to Remedial English, passes and goes to college.
2007 - Vinh's cause is taken up by local human rights group. Newspaper articles appear nationally explaining that making English a requirement for graduation is racist. Civil Liberties Association files class action lawsuit against state school system and his English teacher. English is banned from core curriculum. Vinh is given his Y10 anyway but ends up mowing lawns for a living because he cannot speak English.

Scenario: Johnny takes apart leftover firecrackers, puts them in a model plane paint bottle and blows up an anthill.
1960 - Ants die. 2007 - Security and ASIO are called and Johnny is charged with domestic terrorism. Teams investigate parents, siblings are removed from the home, computers are confiscated, and Johnny's dad goes on a terror watch list and is never allowed to fly again. Scenario: Johnny falls during recess and scrapes his knee. His teacher, Mary, finds him crying, and gives him a hug to comfort him. 1960 - Johnny soon feels better and goes back to playing.
2007 - Mary is accused of being a sexual predator and loses her job. She faces three years in prison. Johnny undergoes five years of therapy. Becomes gay.
Posted by Clunking Fist at 1:24 PM 2 comments: 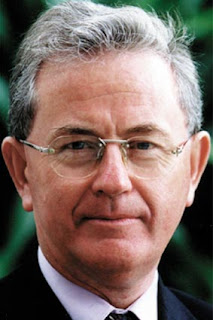 "I may be an arrogant thieving fuckwit, but you, sir, are a rich prick" *

Transitioning to work for beneficiaries and the low-paid has been bollocks-ed up by the tax credits that governments pay these folk. It leaves them facing very high effective marginal tax rates.

In response to a post by Mr Vindico on welfare reform:

I wrote (numbers changed for NZ$):

I have no idea what a benefit is worth, but the tax code could indicate to the payroll clerk how much maximum payback is. E.g. if you are on benefits worth $250 per week, then your tax code would ensure that you payback no more than $250 quid each week (tax code of "B250").
The normal entitlement rules apply to the benefit (again: I have no idea what these rules are for the various benefits), so if you are on a sickness benefit, you could start part at work part-time as you begin to get better. Once you are back full-time and no longer eligible, your benefit stops and your tax code reverts to normal. You would likely have been paying all of the benefit back anyway if you were earning more than $769 per week ($40k pa) back in your job.

I think, (but have no expert knowledge in this area) that it might aid transition back to work for beneficiaries, as they face a marginal tax rate of 30% or 40%.

It would also allow those who receive benefits for permanent illness, disability or injury to work part-time (where possible) in a simple manner. E.g., no forms to fill. You could work different hours each week, depending on how able you are that week: your "B" tax code takes care of the rest.

Okay, so I included a bit of income tax reform in there, too. And it would require all the bollocking tax credit thingies be converted to a benefit. Would that mean bringing back family benefit of $x per child per week? That would also be added to the "B" code max amount. I’ll have to think further on this…

* This refers to his desire to get his socialist hands all over my pay-packet, allegedly to help the poor and oppressed. But instead, he and his cronies go and spend it on BMWs and quangos. I do not mean to imply he is a thief in his personal life. Please don’t sue me, you cunt.

Silence of the Lambs 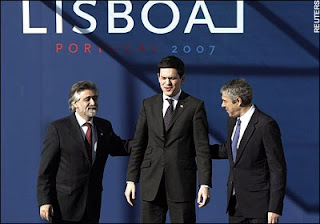 Europe’s çommissars have their hands up Millipede's arse "Hurro, I'd really ruve to sign your ruvry treaty that isn’t a constitution at all. Cuppa tea, what!"

Here in knizilind, bloggers picked up the Electoral Finance Bill (now, alas, Act) issue and ran with it. One of our major daily newspapers subsequently "got it" and crash tackled the gummint and supporting parties on it. They TWICE ran FRONTPAGE fucking EDITORIALS on the power-grab, gag-fest that is this law. The country was a-buzz with talk on "is it/ isn't it" an attack on democracy and free speech, designed to sustain the power base of the gang of four-plus-one (Liarbore, Green (who are, of course, bright shining red), United Future (both of them), Winston First and the bloke known as Progressive (yeah, right)).
The attention of the public was focused sharply upon the activities in parliament. The gummint had tried to pull a swifty, the MSM had (almost too late) noticed, the public sat up and watched, and Dear Leader looked as guilty as she was. It accelerated the decline of the people's party. The (unrelated) icing on the top of this rancid cake was the announcement that the gummint has elected to purchase a new fleet of BMW limos at the cost of $140,000 each (or much more, according to some reports) compared to the $76,000 cheap-and-cheerful Aussie limos.
New Zealand is a nation of sheep, but at least we got passionate about something for a while, other than the rugby (but, wa-hey, Super 14 only days away, go the 'Canes).
See here for Hone Harawira's superb speech:
http://www.nzherald.co.nz/section/story.cfm?c_id=280&objectid=10483104&pnum=0

But this was all piffle compared to the monumental catastrophe that the United Kingdom (nay, most of Europe) is goose-stepping toward: the EU Constitution. Sure, it's been rebranded the EU Treaty. But a Lincoln is still a Ford.
And the silence from the UK MSM is deafening. Starting on Tuesday, the British Parliament will begin the debate on ratification of the Treaty. The gummint has limited the amount of time available to debate the European Union (Amendment) Bill to 12 days. Opposition MP's demanded 18 days.
After the Bill becomes law and the gummint (and other European gummints) ratify the Treaty, Europe will have a new constitution.
It is a self-amending Treaty, which means that the constitution that governs the UK and its interactions with the EU can be changed without recourse to the UK parliament.
Crazy, huh? So powers, rights and responsibilities that the electorate vest in Members of Parliament every five years or so, will be handed to the EU governing bodies. Is this the European Parliament? No, not really: the main power brokers in the EU reside in the European Commission. You do not vote for the commissioners, but they alone have the power to initiate EU laws. The European Parliament can only debate amendments to bills passed before them.
Now, both Liarbore and the Fib Dems promised a referendum on the EU constitution. The constitution (in name) died after it was rejected by French and Dutch voters in referendums.
Hi-ho, a minor setback: the constitution document was rewritten as the treaty and amends the existing foundation treaties of the EU. The original constitution achieved the same outcomes, but by replacinge old treaties. Some of the language was toned down and they removed references to various symbolic items. But the underlying document sets out the same powers, obligations and competencies as the rejected constitution. The Liarbore and the Fib Dems are being somewhat disingenuous (I am refraining from using the phrase "lying stinking power-whoring cunts") in stating that it is not the constitution and thus their promises of a referendum have not been broken.
Quite why Liarbore (and Fib Dem) MPs are keen to give away the sovereignty of their parliament and country is unclear. Many suspect that it is a socialist plot (witness the tendency for the EU to regulate to death anything that is not banned outright) or an elitist conspiracy. Time will tell. In the meantime, a small band of Englishmen ready some lengths of rope and are seeking out strong, well-located lampposts. 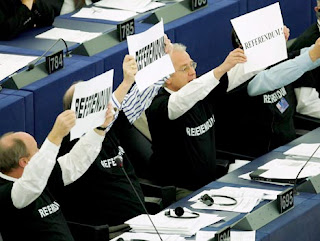 What do we want? When do we FUCKIN' want it?!
Posted by Clunking Fist at 7:22 PM No comments: 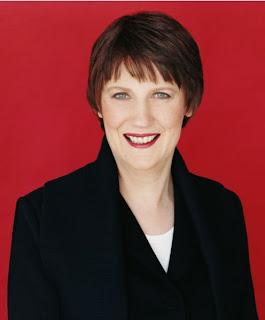 Or this woman, who is unlikely to be the same one as above 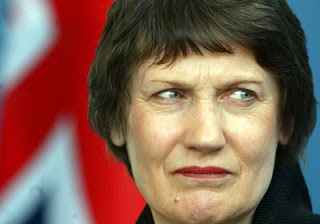 Here she is casting a spell on some poor bloke. 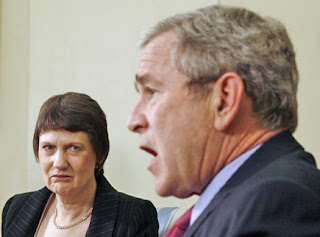 Read here for one reason;
http://www.kiwiblog.co.nz/2008/02/a_whopper_lie_from_the_pm.html

Posted by Clunking Fist at 1:06 PM No comments: 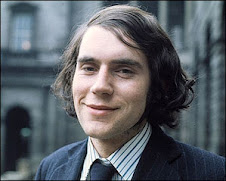